adding livestock to the farm

Farmers Can Depend On LP Gas

Clean-burning LP (liquid propane) gas is a reliable and efficient energy source farmers can rely upon. Easy to store and readily available in rural areas, LP gas is a valuable tool for the following activities:

Grain or Crop Drying.  Removing moisture from grain and other crops is critical to the harvesting process. A propane gas drying system can reduce crop loss caused by adverse weather since crops no longer have to be left in the fields to dry. A propane-fueled grain dryer distributes heat evenly, using only 1,650 British Thermal Units (BTU) to remove a pound of water as opposed to the 3,500 BTU required by older technology. The result is a higher-quality grain because it is more evenly dried. In addition, propane will not contaminate grain as other fuels would in the event of a leak.

Weed Control.  Approved for use in both conventional and organic farming, propane torch kits are the perfect answer to weed control. Weeds are quickly killed with a pinpoint flame at any stage of crop growth without harming the crop. Environmentally-friendly propane gas torches cost less than herbicides and pesticides and do not damage soil microbes. Propane torches are not weather dependent, so they can be used even if it is windy or the soil is wet. Unlike with the application of herbicides and pesticides, farmers can return to the field immediately after treatment.

Irrigation. The latest technology in propane-powered irrigation engines runs more efficiently than either diesel or gasoline systems. The initial cost is up to 50 percent less than a diesel engine with comparable power, and maintenance costs are reduced because clean-burning propane does not leave as many deposits on engine components. In addition, propane produces up to 24 percent less greenhouse gas emissions than comparable gasoline engines and up to 11 percent less than diesel engines.

Generators. An interruption in electrical power to a farm can be costly if critical equipment such as water wells and building ventilation fans are down. Propane-powered generators make sense because unlike gasoline or diesel fuel, propane does not degrade over time.

In addition to being reliable and energy efficient, propane is an environmentally friendly fuel that is not harmful to either soil or water. It is less flammable than other petroleum products and won't ignite unless the ignition source is at least 940 degrees Fahrenheit, approximately twice the ignition point of gasoline. Since propane is a liquid, in the event of a tank leak the propane will vaporize and dissipate rather than puddle on the ground.

There is an abundant supply of propane gas in the United States, so much so that the US exports more than it uses. Its abundance makes it an affordable option for farmers. For more information, contact Avery Oil And Propane. 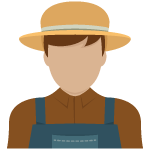 Are you considering adding some livestock to your farm? Maybe you just want to add a few animals to help produce a little extra food for your family each year. I have worked hard to put together a website that can help you find the best animals to buy, how you can feed those animals at the least cost to you, and the lists of food products you can get from the animals. It is my hope that you and many other people will learn what needs to be known before purchasing any livestock for their farm or property so success can be had.